I’ve got a story coming in the July/August issue of longtime speculative fiction mainstay, The Magazine of Fantasy and Science Fiction. It’s a magazine I first encountered when I was growing up, so it’s very cool to see a story of mine in its pages.

It’s a longer story, a novelette in the terminology of science fiction magazines. It’s set in the same city as two of my older stories, “The Moonless, the Midnight Eye, and the Season of the Last Gate,” and “Sunfast, Shadowplay, and Saintswalk.”

You should be able to find the magazine at many bookstores that carry magazines (including the “big box” bookstores you might find at your local mall), or you can get it in various electronic formats from Weightless Books.  (I’ll post a direct link to the issue when it’s available.)

Also, as part of Daniel Braum’s Night Time Logic reading series, I’ll be appearing on July 21, 2022 along with Robert Levy, whose story “Ceremonials” will be in the same issue.  Dan will be talking to us about our stories and having us read a bit from them. The event will be viewable on YouTube and available there afterwards. 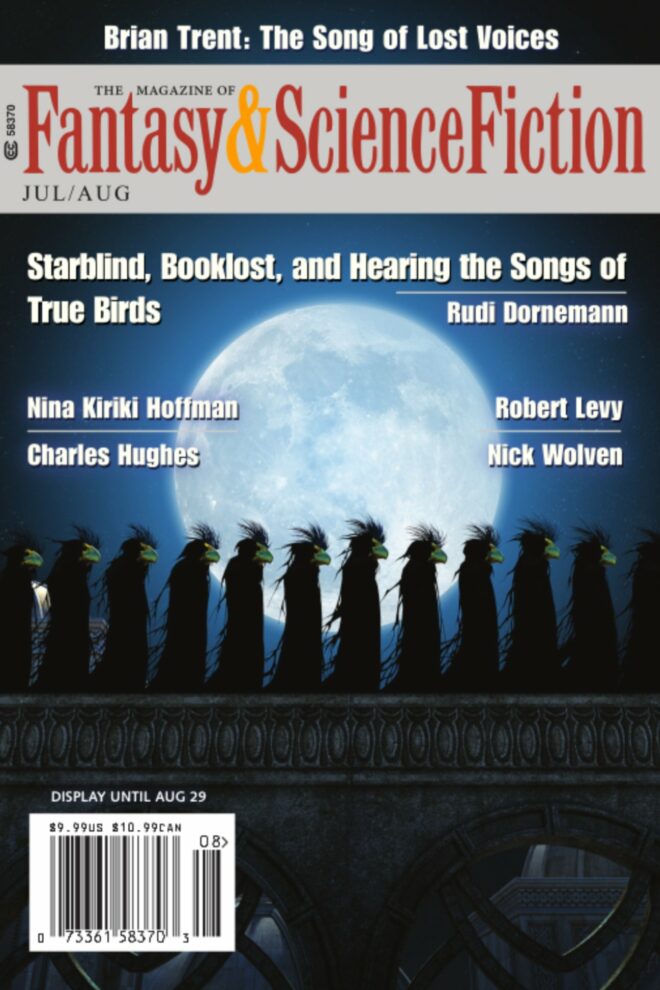 Starblind, Booklost, and Hearing the Songs of True Birds

Historian Vitalius Cotton’s brother has been cursed by prophecy since they were kids. Vitalius has a chance to return his brother to a normal life, but it probably bring huge changes to the city, it’s history, and Vitalius’ own life. “Starblind” is set in the same city as my previous stories “Moonless” and “Sunfast.” His […]