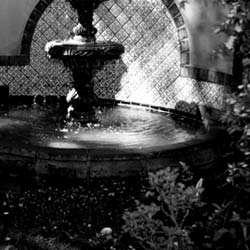 A fairy tale with a robot.

In the future, on Mars, our young narrator is left alone for months at a time in an automated, intelligent house that sees to all his needs. He tells himself stories to pass the time, and one night, something appears that he hasn’t imagined…

This story appeared in the Fortean Bureau, which–unfortunately–isn’t around any more, but can still be found via the Wayback machine.

The superstitions began in these self-told stories. Simply imagining trolls in the kitchen or kobolds in the attic gallery was too easy– I had to put some obstacles between me and the happy-ever-afters. I made up scroll-long lists of rules, cross-referenced with even longer lists of ways to atone for breaking them. Maybe I’d neglect to sing a song in honor of the troll-queen before I asked the kitchen for lunch, or I’d go up to the gallery without the shiny stone I needed to bribe safe passage from the kobolds. There were always ways to set things right, baroque rituals to mollify offended trolls, propitiatory quests to keep me in the good graces of the laundry-djinn. I could complicate a single story across two or three days, and by the end of the first week of any tide-month, my world was thoroughly tangled up in the intricacies of imaginary cause and effect.