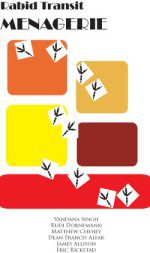 Set in a rather strange future, this story includes a sphinx, a long walk under the ocean, and a main character whose head is shaped like the crescent moon.

When she finally got though the door, Moonhead Lunes knew her heart was gone: she could see fragments of broken candy-box still melting into the shag. The jagged blue edges of gluco-glass were only slightly softened, but she doubted she’d find any prints. Someone had been careful enough to carry the box over to the rug before breaking it. Barely a smudge of amnion syrup left– the carpet had soaked up the rest and quivered now with waves of sugar rush. If Moonhead hadn’t happened to come home early, the floor would have digested all the evidence– could have been weeks before she’d missed her heart. Someone had known what they were doing.And they’d taken her soul: that explained the trouble with the door. She could see where they’d trenched into the plaster to find the sensors and then followed the wires, pulling the whole rhizome out of walls, ceiling and floors, leaving a web of slit-trails in the plaster. That left the house deaf to her movements, blind to her body heat and unresponsive to her touch. The air was cold, the lights dim, all the settings defaulted out the way they were when the house thought it was empty. Moonhead felt abandoned, alone, annoyed. She had half a dozen hearts, but only one soul, and she never seemed to back it up often enough.