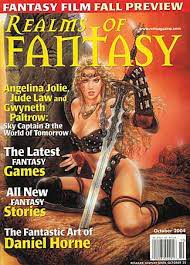 In the early days of the United States, a community that lives on trade via the canal system receives a visitor who represents a new and different kind of transportation.

This story appeared in Realms of Fantasy magazine in October 2004.

One September morning, Sophie and her father found a clockwork man in their courtyard, curled up in the far corner where the iron fence met the house wall. His ceramic skin was wet with last night’s rain and cold to the touch. He wore two heavy cloth coats and had a note pinned to his shirt: If found dead or wound-down, please place body in a Firedrake Model IV Furnace for two hours. He had barely enough energy left to hold up his own head when they brought him inside and laid him on the fire. They piled wood on and around him and left him to bake for a few hours.

He sat up around lunchtime.